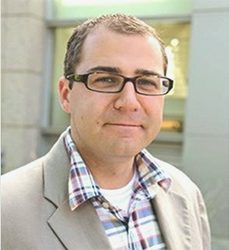 Dr. Michael John Page was born and raised in Thunder Bay, Ontario where he graduated from the Port Arthur Collegiate in 1994. Mike then attended Carleton University in Ottawa graduating with his B.Sc. degree in biochemistry in 1998. Mike entered the UBC Biochemistry & Molecular Biology graduate program under Ross MacGillivray’s supervision and supported by competitive graduate studentships from Canadian Blood Services. During his time in the MacGillivray lab, Mike designed, created and hosted the first web site for the UBC Centre for Blood Research. Mike successfully defended his Ph.D. thesis entitled Bioengineering coagulation factor Xa substrate specificity into Streptomyces griseus trypsin in 2004. During his graduate studies, his fellow graduate students recognized Mike’s achievements by selecting him for the 2001 Zbarsky Prize. Dr. Page then completed a highly productive postdoctoral fellowship studying the biological activity of thrombin with Dr. Enrico Di Cera at Washington University in St. Louis. In 2010, Mike moved to a junior faculty position at the University of California, San Francisco supported by a grant from the American Heart Association and mentored by Dr. Charles Craik. At UCSF, Michael developed a peptide-based probe that was able to detect blood clots in real time. He and his team won a major biochemical entrepreneurship competition that also stimulated him to patent his discovery and to form a spin-off company called Biopaint Inc. Tragically, Mike collapsed and died suddenly in June 2013 at age 36. In addition to Mike’s sustained academic success, he was well-liked by his peers and friends. As one colleague describes him:

Mike was the essential glue in keeping our group coherent during grad school and made those years so memorable for all of us.

After his arrival in Vancouver in 1998, Mike hosted the annual biochemistry hockey tournament in Vancouver and whether in Vancouver, St. Louis or San Francisco, he continued to host the tournament and to maintain his support for his beloved Vancouver Canucks hockey team. Mike was always there to help and support his colleagues. Mike was a great guy who was fun to be around – he really had a passion for life. As one of his graduate student colleagues recalls:

Mike had an endless excitement and drive for science, sports and life in general and he shared all of those interests with his friends