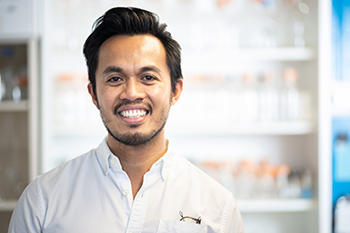 “Evolution is a unifying theme in the urgent medical and public health problems we face today including cancer, the rise of antibiotic resistance, and the spread of pathogens. But the ability to predict evolution remains a major challenge because it requires bridging several scales of biological organization. Potential evolutionary pathways are determined by the “fitness landscape” (the genotype-phenotype relationship), but how this landscape is explored depends on population dynamics and ecology.

In the first half of the seminar, I describe our work where we showed that the fitness landscape of an RNA virus escaping a neutralizing antibody can be projected onto two biochemical traits, the capsid folding stability and its binding affinity to the antibody. We then developed a theory based on protein biophysics and population genetics to predict how the fitness landscape is dynamically explored. Using a droplet-based microfluidics “Evolution Chip”, we propagated millions of independent viral sub-populations, and showed that by tuning viral population size per drop, we could predict the direction of viral evolution. In the second half of the seminar, I will describe a chromosomal barcoding technique that allows simultaneous tracking of ~106 distinct cell lineages in an evolving bacterial population. We used this approach to study at high-resolution how microbial populations evolve under sub-inhibitory antibiotic concentrations.”