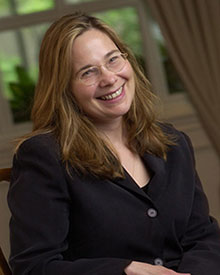 Congratulations to Natalie Strynadka on the news that she is awarded a Senior International Research Scholar award from the Howard Hughes Medical Institute (HHMI).  Natalie is one of only 13 scientists worldwide to be named for this award, as announced on September 26, 2012.

Since joining the Department of Biochemistry and Molecular Biology in 1997, Natalie has built an international reputation for her multidisciplinary structural biology approach to study the molecular structure and function of membrane protein assemblies that play key roles in antibiotic resistance and bacterial pathogenicity. The long-term goal of Natalie’s work is to use this fundamental structural information to guide the design of novel antibiotics and vaccines to treat bacterial infections.

Dr. Strynadka has previously been recognized with a number of awards including designations as a Medical Research Council of Canada Scholar, a Canadian Institute of Health Research Scientist, a Burroughs Wellcome New Investigator in the Pharmacological Sciences, a Michael Smith Foundation for Health Research Senior Scholar, a Canada Council of the Arts National Killam Fellow and a UBC Distinguished Professor.  Natalie was elected a Fellow of the Royal Society of Canada in 2006 and in 2010 received a Senior Canada Research Chair in Antibiotic Discovery and Medicine.  The latest honour from HHMI was established to support outstanding biomedical scientists working outside the United States who have made significant contributions to fundamental research in the biological sciences.  Each HHMI senior international research scholar receives a grant of $100,000 per year over five years, and will present their research at scientific meetings held at HHMI.