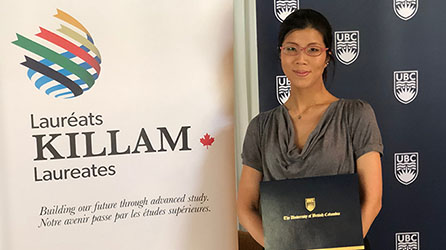 “Characterization of Interaction between Ty1 Integrase and RNA Polymerase III For Ty1 Retrotransposon Insertion Into the Yeast Genome“, by Stephanie Cheung, PhD candidate in the Measday Lab.

Abstract
Retrotransposons are eukaryotic mobile genetic elements that transpose by reverse transcription of an RNA intermediate and are derived from retroviruses. The Ty1 retrotransposon of Saccharomyces cerevisiae (S. cerevisiae) belongs to the Ty1-copia superfamily. Ty1 integration into the S. cerevisiae genome occurs within a 1 kb window upstream of genes transcribed by RNA Polymerase (Pol) III, including tRNA genes, 5S rRNA genes, and other small non-coding RNA genes. A Ty1-encoded protein, integrase (IN), is needed for catalyzing the insertion of Ty1 cDNA into the genome. The functional domains of INs among retrotransposons and retroviruses are also strikingly similar although the host genome target site selection is different. We seek to identify the S. cerevisiae host factors that mediate the specificity of Ty1 integration target site selection. We find that Ty1-IN interacts in vivo and in vitro with Pol III-specific subunits using mass spectrometry and co-purification approaches. The interaction with Pol III is specific as Ty1-IN does not interact with Pol II or the transcription complexes that recruit Pol III to promoters. Next, we narrow down the region required for interaction with Pol III to the Ty1-IN C-terminal (Ct) 75 amino acids. Using a purified version of the Ty1-IN Ct we demonstrate using single-particle electron microscopy that Ty1-IN docks onto the RNA Pol III complex in a region that maps to the Pol III jaw and clamp domains. We test a panel of Pol III subunit mutant strains for Ty1 integration, and find mutations in the Rpc34, Rpc53 and Rpc160 Pol III subunits that abrogate Ty1 insertion upstream of tGLY genes. We also optimize a whole genome Ty1 mapping protocol and analyze de novo Ty1 integration sites in a subset of these Pol III mutant strains. We find that rpc34 mutants are less efficient at targeting the Ty1 element upstream of all tRNA genes whereas an rpc53 mutant has no effect. Taken together, we establish that RNA Pol III is the host factor that tethers the Ty1 intasome to insertion target sites at Pol III-transcribed genes.