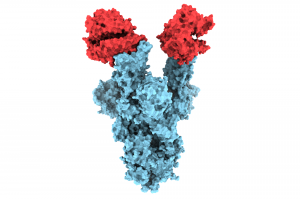 Using cryo-electron microscopy, UBC researchers have revealed the structure of the N501Y spike protein mutant, shown above (in blue) bound to two copies of the ACE2 receptor (in red).

UBC researchers are the first in the world to publish structural images of the N501Y mutation on the SARS-CoV-2 spike protein—a change believed to be partly responsible for the highly infectious nature and rapid spread of variant B.1.1.7. The pictures, taken at near-atomic resolution, provide critical insight as to why the B.1.1.7 variant—first detected in the U.K and now accounting for a growing number of cases across Canada—is more infectious. The images also add to the growing body of data indicating that existing vaccines are likely to remain effective in preventing mild and severe cases caused by B.1.1.7.

What do these images reveal about the B.1.1.7 variant?

Viruses are constantly mutating. The B.1.1.7 variant of concern, which was first reported to the World Health Organization in mid-December 2020, has an unusually large number of mutations. Of particular interest is a mutation known as N501Y located on the virus’s spike protein, which is what the virus uses to attach itself to human cells.

The images we captured provide the first structural glimpse of the N501Y mutant and show that the changes resulting from the mutation are localized. In fact, the N501Y mutation is the only mutation in the B.1.1.7 variant that is located on the portion of the spike protein that binds to the human ACE2 receptor, which is the enzyme on the surface of our cells that serves as the entry gate for SARS-CoV-2.

Our analysis revealed that even though the N501Y mutant can bind and enter our cells more readily, it can still be neutralized by antibodies that block the entry of the unmutated version of the virus into cells.

This is an important observation and adds to the growing body of evidence that the majority of antibodies elicited in our immune system by existing vaccines are likely to remain effective in protecting us against the B1.1.7 variant.

How did you capture these structural images?

The SARS-CoV-2 virus is 100,000 times smaller than the size of a pinhead, making it undetectable using a regular light microscope. The proteins on the surface of a virus are even smaller.

To visualize the detailed shapes of viruses and proteins, we use cryo-electron microscopes, which can be up to 12 feet tall. This powerful imaging technology uses beams of electrons to visualize shapes of tissues and cells using ultra-cooling, or “cryo” techniques—essentially, the imaging of samples at liquid nitrogen temperatures.

Are you researching other COVID variants?

We are currently examining other variants, including P.1 (Brazilian), B.1.351 (South African), B.1.427/B.1.429(Californian) and B.1.617 (Indian) variants, and trying to understand how these mutations alter how the spike protein interacts with neutralizing antibodies. We are also looking at how these mutations may change how the virus binds to ACE2.

It’s important to understand the different molecular structures of these emerging variants to determine whether they’ll respond to existing treatments and vaccines and ultimately find ways to control their spread more effectively.